This machine will not run Linux without a lot of kernel work. However, if you have one, and you don't want it anymore, spot would love to take it off your hands.

Cray Research started its Business Systems Division about four years ago to build supercomputer systems that would serve business needs. The company's Cray CS6400 Enterprise Server uses an SMP architecture to support up to 64 SuperSparcs?, each clocked at 60 or 85 MHz. 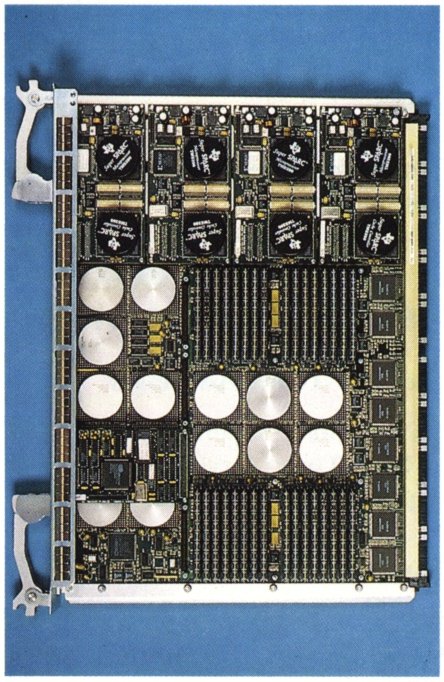 Since bus traffic normally degrades an SMP design that's built around eight processors, the CS6400 seems to defy logic. The system dodges this limit by using four buses instead of one to reduce memory contention. Each bus has its own private bank of RAM, while the processors connect to every bus, as shown in the figure:

Physical memory is interleaved among all four memory banks to create a shared memory space. You can add up to 64 memory modules to the system, for a maximum of 16 GB of RAM. To reduce bus traffic further, every processor module (which consists of four processors) has a 2-MB static RAM (SRAM) cache. Bus-watcher logic snoops all memory accesses and updates the caches to maintain memory coherency.

To ensure optimum I/O throughput, up to 16 buses support up to 64 I/O controllers. The I/O subsystem can manage up to 5 TB of on-line storage. Larger storage capacity is possible via the use of either disk arrays or an off-line archival medium, such as tape. The CS6400 supports communications via Ethernet, 100-Mbps Ethernet, FDDI/CDDI, Token Ring, and ATM.

To host mission-critical applications, a System Service Processor (SSP) -- which is actually a built-in Sun workstation -- monitors the system's health. In the event of a major failure, the SSP restarts the system and logically removes the problematic har dware. The system design allows you to hot-swap faulty hardware without interrupting service.

The computer runs Solaris 2.4, which is a Unix S5R4 derivative from Sun Microsystems. It can host Sun workstation applications and provide access to database applications, such as Oracle's Oracle7 and Informix Software's Informix Online Dynamic Server. The alliance with Sun also fits into a strategy of offering workstation solutions (via Sun), with connectivity to the CS6400 to tackle the huge jobs.

A basic Cray CS6400 has one processor module and 512 MB of RAM (but no disk) and costs $400,000. The basic system is rated at 3.8 GFLOPS, although floating-point calculations don't normally figure into the type of work this system does. The big box, with up to 64 processors and 16 GB of RAM, costs about $4 million.

The CS6400 is rather like the SPARCcenter-2000 in principle, but there are some significant differences: 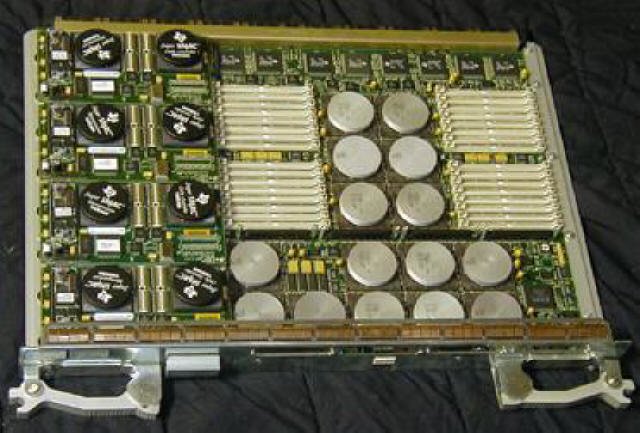 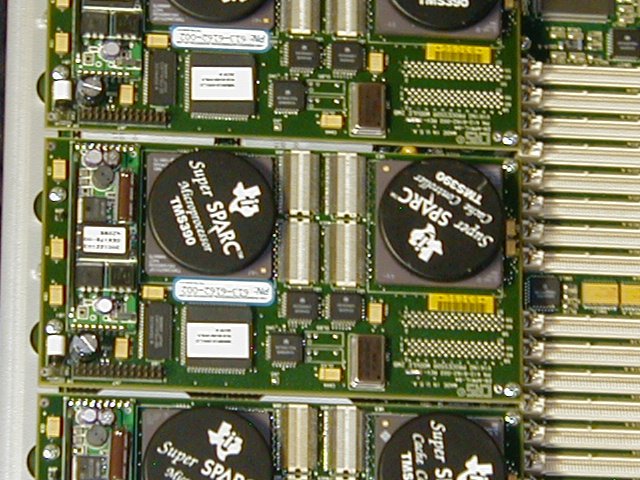 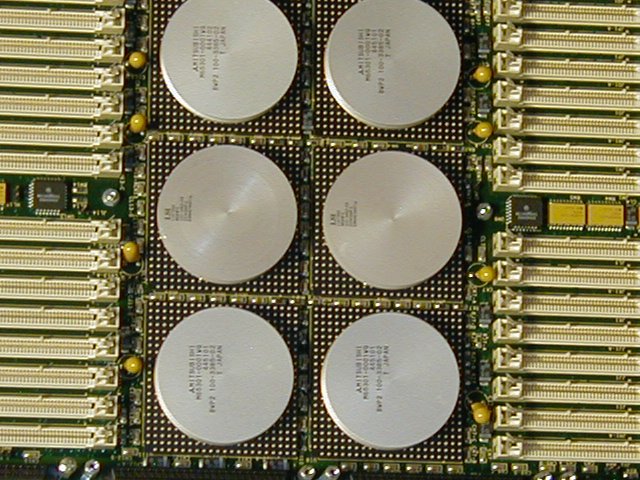 The CS6400 cannot use standard MBus/XBus? modules, but rather must use CS6400-specific modules (the module PCB layout is completely different). Confusingly, the CS6400-format CPU modules share the same names as the equivalent 'normal-format' modules: standard CPU options for the CS6400 list "SM51", "SM61", "SM51-2", "SM61-2" modules, with "SM81-2" listed as a standard upgrade.

The latter implies that even the hottest SuperSPARC? CPU modules would not overheat any part of the CS6400.

The CS6400 does "dynamic PROM selection" (within each domain!) in a similar manner to the SPARCcenter-2000, so the issues regarding having the same PROM versions on each system-board within a domain obviously apply.